California is pushing the limits to reduce greenhouse gas emissions.  In the session just closed, the State Legislature passed two bills to reduce emissions by 40% of 1990 levels by 2030 – SB 32 (F. Pavley) requiring the change, and its companion bill AB 197 (E. Garcia) requiring additional accountability for it and special considerations for disadvantaged communities. Governor Brown has signed both.

Can California do it? Yes, but barely. The former goal set by AB 32 in 2006 required reducing greenhouse gas (GHG) emissions to 1990 levels by 2020.  We’re on track for that.  The new goal is much harder, requiring California to reduce emissions by 40% of 1990 levels by 2030 – just fourteen years from now. Work by Lawrence Berkeley National Lab shows that California will reach the current goal of 1990 levels by 2020 using committed policies, but – as seen in the figure to the right –- will need to rely on policies to which the state is not yet committed and to rely on potential technologies and market futures to reach the 2030 goal. A lot can happen in 14 years, and clearly technology will accelerate.  The new goal keeps a strong pressure on the market to push for that change. 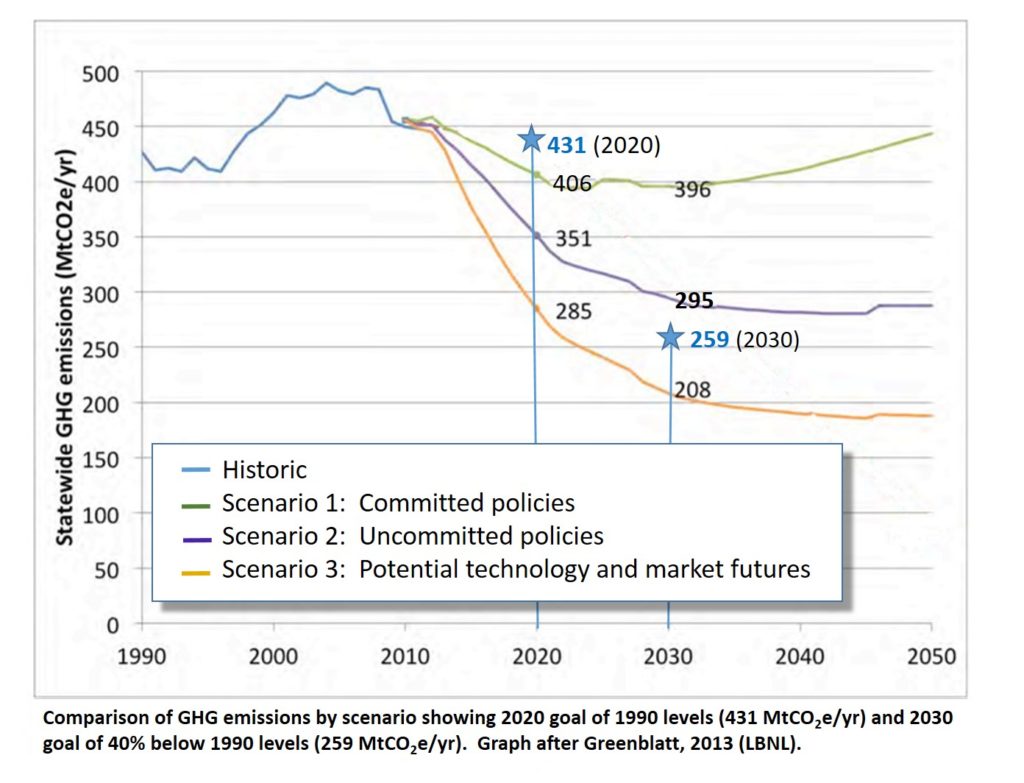 Cap and trade will help reach the goal, but has been hampered by litigation since 2013.  The case brought by the California Chamber of Congress claims that cap and trade is a form of tax and so requires a 2/3 vote. There are three possible outcomes of the trial: 1) that allowance sales are simply a sale of property, 2) that they are a fee and not a tax, or 3) they are a tax.  In either scenario one or two, cap and trade would continue as planned.  In scenario three, allowances could not be sold but would be given away.  To whom would be the decision of the California Air Resources Board (CARB).

AB 197 (E. Garcia) provides transparency and additional accountability for the California Air Resources Board who is in charge of implementing the requirements.  AB 197 adds disadvantaged communities and those most affected by air pollution as a priority consideration. It also includes use of social cost of carbon in evaluating the cost-effectiveness of emission reduction measures to better account for the full array of costs and benefits associated with reducing greenhouse gas emissions.

SB 1383 (Lara) also passed in the legislative session just ended.  It requires reduction of short-lived climate pollutants: methane by 40%, hydrofluorocarbon gases by 40%, and anthropogenic black carbon by 50% below 2013 levels by 2030. The bill also would establish specified targets for reducing organic waste in landfills.